The first Nazi extermination camp (Death Camp) was in Chelmno on Ner (Kulmhof).  Kulmhof sometimes called a Laboratory or Camp, in reality was not a typical camp at all. It was the place devoted to the extermination of the Jewish population concentrated previously in the ghettos on the area of so called Reichsgau Wartheland (Warthegau) i.e. the Polish area included into the Third Reich. It covered Wielkopolska (the Great Poland), Kujawy and the Łódź region. A number of the Jews from Germany, Austria, Czech and Luxembourg who were previously resettled to Łódź were also killed in this camp. Only a small working group of prisoners were kept alive in Kulmhof for longer time - the rest was gassed immediately upon arrival.

The exact number of the victims of the concentration camp in Kulmhof cannot be determined due to the lack of necessary information. The official German statistics from 2 January 1943 on the issue of the Final Solution to the Jewish Question presented directly to A. Hitler mention that 145.301 Jews went through the camp in the Warthegau. Adding 7,196 from the Łódź ghetto in 1944 we come to the total of 152.497 people. On the other hand, it is known that the Gypsies from Austria, Soviet prisoners of war and groups of Poles, who were probably not included in the statistics, were brought there as well. The total number estimated at 170.000 seems to be most probable. The experience gained by the SS-Sonderkommando Lange and other special units participating in Aktion T-4 was clearly used in the Final Solution to the Jewish Question. The plan for the Final Solution to the Jewish Question in the area of Warthegau was probably created in the summer of 1941. We call it AKTION GREISER, because the action of genocide of the Jewish population in the area of Warthegau started upon the initiative of GL A. Greiser himself, regardless of the preparations held at the central level. 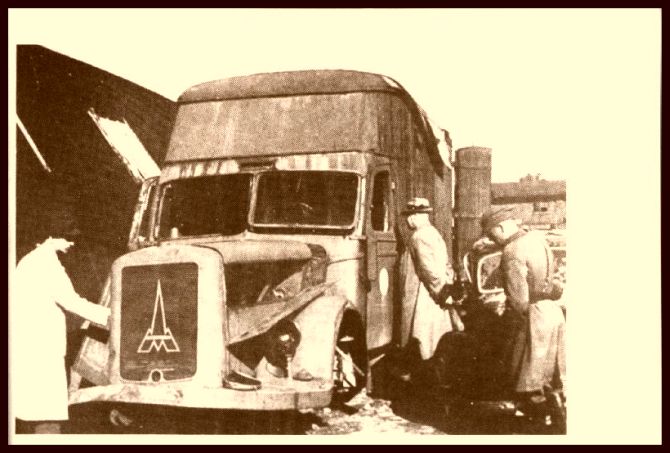 Gas-van from Kulmhof in the Ostrowski Factory in Kolo. Copyrights by IPN.