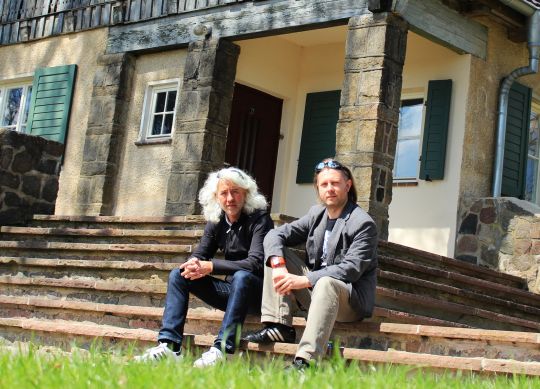 Cameron Munro (1964) and Artur Hojan (1973) founded “Tiergartenstrasse 4 Association” to research Nazi crimes. Between 2005 and 2009 the Association researched Nazi Euthanasia in the  Wielkopolska region (Warthegau). Some of the results of this work was published in “Chronicle from Dead Places” (2005) and “Opfer der NS-Psychiatrie” (2007).

The Association uses different techniques to traditional research undertaken by historians in museums and universities.  Firstly the association believes that no research can be fully undertaken without a detailed search and research of the places where the events occurred. So at least half the time on each project is spent visting, finding or refinding the original places where events occurred. The Association produces detailed maps of these locations, speaks to local people, visits local museums and archives. This we call holocaust archeology. This is combined with traditional historical techniques with time spent in archives, libraries etc. This we believe is a unique way to research these crimes and is especially relevant in countries such as Poland where so much exists and so little is known outside of the country.

We currently work on four projects.The largest of these is the research of the sub camps of Auschwitz. This project began in 2006 in association with the Auschwitz State Museum. The aim is to: find the locations of the approximately 45 Auschwitz sub camps, to photograph the remnants, draw detailed maps, speak to local witnesses, source new photos and documents, undertake detailed resarch in the Auschwitz archives and write the first complete detailed book on the sub camps. The Association spent 2 years finding the sub camps and 1 year in the Auschwitz archives. We are now finally bringing this information togethor in a book of approximately 1,000 pages. We also finishes the the very first complete book about history of Kulmhof death camp.The Association has an archive of approximately 100,000 modern photographs from many countries and places associated with Nazi crimes. A small sample of these are shown on this site.